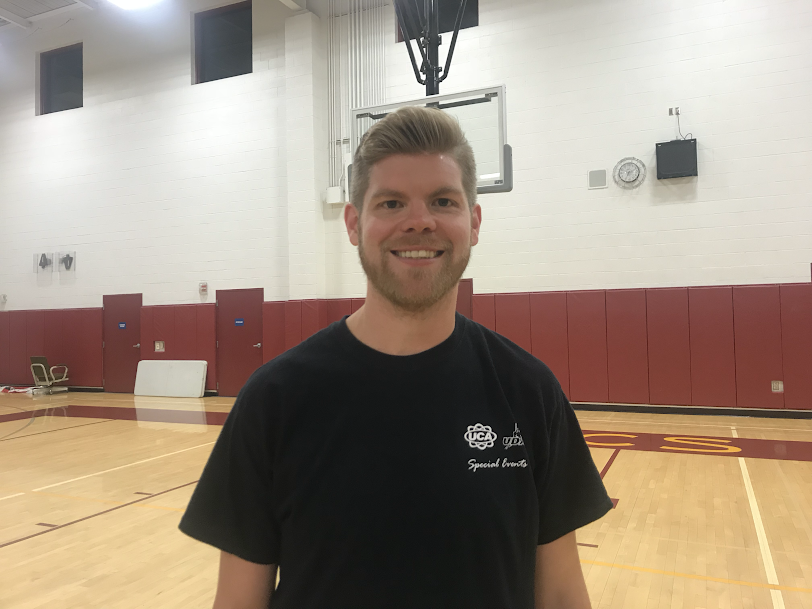 Eric Bensing poses for a quick photo after practice with the Esperanza Cheer team.

As the new 2019-2020 season approaches for the Esperanza Cheer program, the search for a qualified coach began. Mrs. Walters, athletic women’s director, along with co-varsity coach, Katie Sarber, worked hard to find a perfect fit for the girls.

Getting a new coach is no easy job, making sure he has knowledge of the sport and enough experience is important for the girls to grow and get better. This is why Eric Bensing was hired here at Esperanza.

Coach Bensing has a huge background in the cheer world. “I cheered for three years in High School, four years at a D1 university, two years on an all star team and I’ve also worked for the National Cheerleaders Association for 13 years and for the past 15 years I have been coaching and choreographing for high schools, colleges and all star teams throughout the nation,” said Bensing.

With all his experience, he ensures the girls that this season is going to be fun and productive. He has high goals for the cheer teams and wants this season to be much better than any season previously.

“My goals for the cheer team are to bring a new level of difficulty to both teams, have both teams become a wow factor both at EHS events and in the community. I’d like to recruit to increase the number of individuals at tryouts and in the program. One last major goal would be to introduce boys to the cheer program,” said Bensing.

The Esperanza cheer team are very fortunate to have been given an experienced coach. Years previously they have been through a lot with coaches and the constant change of coaches, however girls think that this coach has a lot of commitment for the team and will last. “I think Coach Bensing will last with this program because he seems very determined to make us great and works well with our personalities,” said varsity athlete Jessica Quinteros.

The Esperanza cheer program has had a long running in not winning any national titles. Coach Bensing wants to bring that back and work hard this season to get our titles again. “I came to Esperanza because of the reputation it once had and the talent it still has. The level the team currently is at was very attractive and I knew it was the perfect program to come back coaching for,” said Bensing. “When I first moved to CA in 2009, Esperanza was one of the best HS teams in the state and was well talked about among many of my cheer friends. They used to set the standard of what a team should looked like in the advance division,” said Bensing.

The girls have a long season ahead of them. With a new coach coming in, there is a lot of high expectations. “I’m not really nervous on having a new coach because we can learn on a new coaching style and I’m excited on learning bigger and better things,” said varsity athlete Anna Koclanakis.

With a new coach coming in there is a lot of adjusting and adapting but that should be no problem for the girls. Coach Bensing is very excited for this season and the seasons to come. “The talent in this program is strong and it needs to be showcased to the public. Also, my two assistant coaches come from the era when EHS was very competitive and that will make this transition super easy. All three of us coaches work very well together and to me that’s very exciting. Also, the drive this year’s teams have will make a world of difference. I’m excited because my athletes are excited for this year,” said Bensing.