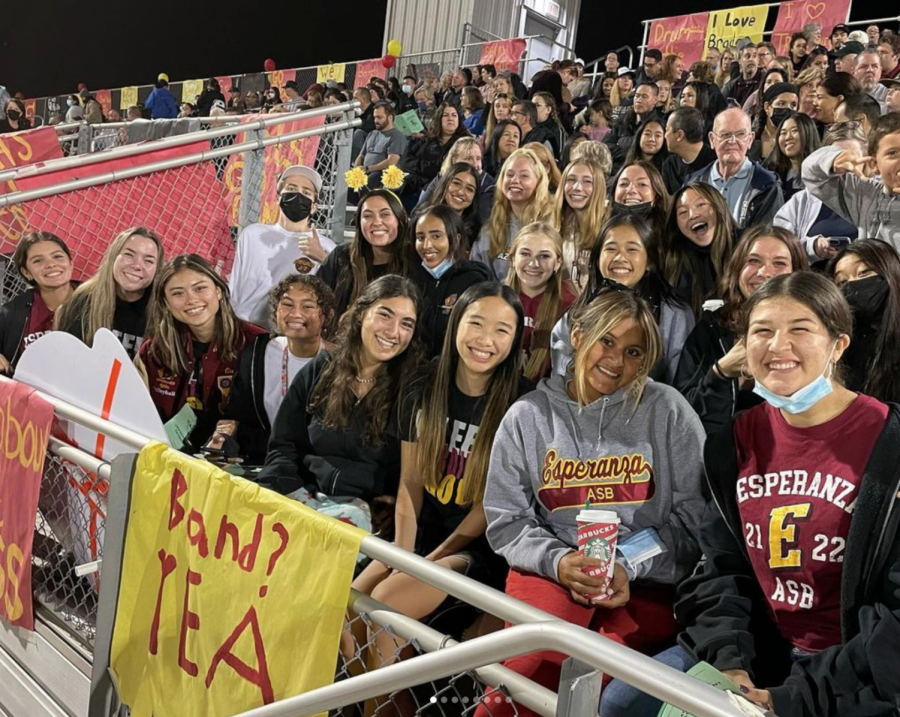 Esperanza's student section, "The Hut", at the band pageant.

The Esperanza entertainment unit shined at championships. Band and color guard’s competition took place on Saturday, November 20th, 2021 at Ramona High School. It acted as the group’s last hurrah before their season came to a close.

The student section was packed with spirited Aztecs all awaiting the performance of band and color guard. At the start of the competition, the lights began to dim and the conductor lifted his arms. Instantly, the band came to life. Melodies from clarinets, saxophones, flutes, and drums played together in powerful synchrony. Flags flew and rifles somersaulted in mid-air.

Color guard sparkled during their performance and placed third out of twelve schools. T

heir hard work and preparation most definitely paid off.

“We have prepared for championships by having zero periods every morning, and after-school rehearsals twice a week,” says color guard captain Laurana Tetzlaff, “I have also held optional practices for my team.”

But the trek to the finish line wasn’t without obstacles. Junior Jordan Ruvalcaba recounts her injury and the difficulties she had preparing for the season while also fulfilling her role as captain. Leading a team is certainly a challenge but Ruvalcaba powered through it!

“This season I injured myself and was not able to finish my season which was very hard for me because I had known most of the work in the show and not being able to be out there with my team was very hard,” says Ruvalcaba, “I overcame this challenge by keeping a positive mindset and would still support the team by going to the performances and helping them improve on their work.

Band also placed 4th in championships. Despite zero period practice and intense work ethic, these incredible students juggled playing music and school. Senior Brett Gibbons reinforces the idea that teamwork and creating a so-called family with fellow students is the most important.

“If I could say one thing to my team, I would say that I’m incredibly proud of them and so happy I was able to work with them. They made going to 0 every day at 6:30 in the morning worth it and the insane amount of hours we’ve put into it is always worth it,” says Gibbons, “I’m happy to call them a family because we definitely wouldn’t have made it as far as we did if it wasn’t for the strong connection we all had with one another.”