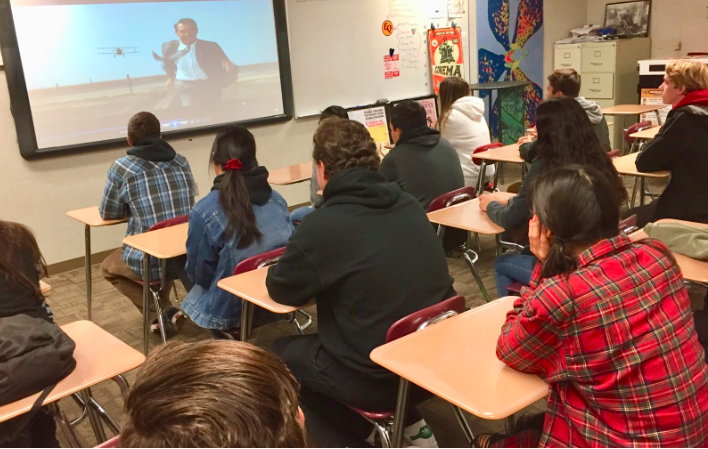 Anyone Can Become a Movie Producer

The classroom is dark except for the white and blue fairy lights wrapped around the two trees next to the smart board. Film appreciation is a fine art that is only offered to juniors and seniors. In film appreciation the students learn how to get a better perspective of visual mediums. They are given a blended multimedia experience when they take this class.

Steve Nordwick, who has been teaching film for eight years, has a masters in directing and went to school at Long Beach State. He wanted to teach film because he likes being involved in film where that is in front or behind the camera.

“This class is a fine art because the students look at visual, performing and technical arts,” Nordwick said. They learn composition and acting technique while trying to make the biggest visual impact with a photograph.

“There are 2 sections offered every year for this class. A typical day in film is to look at a film or film based lighting, story telling, film genres, specific actor or directing style,” Nordwick said. While looking at all these elements students will usually watch a film to get a better perspective.

“Besides just watching a movie, we would take assignments after movies to analyze them,” senior Daniel Wilder said. The workload in film is very little besides the projects.

Two projects are required every semester, one is for a grade and one is for extra credit said Nordwick. They are two to three minute films and the students have to include the filming techniques they learn in class.

“Students don’t have to buy technology, they have to work where they are at. Working together with other students allows their skill set to go up,” said Nordwick . Nordwick is always learning with his students about the “latest and greatest apps for film”

The grading scale in Nordwick’s class is not complex.Junior Raven Bryan said, “A slip up can cost you with grades, but other than that it is not too hard.” A student’s grade weighs mostly on the film projects with a few reflection questions on a film.

Students work mainly in class with no homework besides producing their own film.

“All you really have to do well on is the projects,” said Wilder.

Nordwick has changed with the class throughout the years of teaching. “To learn how to articulate and how to direct something to a student, how to break it down,” said Nordwick. To train a person to look at the process of what it goes into film production.

Each unit has a certain type of film genre to them. The students learn about each genre and the key elements that it is made up of. `

“This class gave me a take on certain genres I would have never thought to watch,” said Wilder. The main focus of each genre is to look at major motion pictures from the past 100 years and to learn why each film is a time honored piece.

“I would take this class again because to have to watch those movies again in a different perspective would be beneficial,” said Wilder.